For many, Frank Miller’s Batman: Year One is the beginning. To those who accept it as such, it is the first Batman story– and here I mean “first” in-universe, in that it kicks off a continuity that many others follow– and who could blame them? Year One perfectly lays the foundation for many of the relationships, characters, and iconic imagery that are essential to Batman as a whole, and all the while is never too grand or self-praising about it. Miller simply lets the great moments speak for themselves, and that may very well be part of the reason there are so many in this story.

From the beginning, it is clear that this is a story not just about Bruce Wayne and Batman, but about Jim Gordon as well. The very opening panels of Year One emphasize this, while simultaneously contrasting the outward appearance of Bruce and Jim as they arrive in Gotham. The parallels between the two continue throughout the graphic novel, as we see both men struggle to learn the ropes of the city.

Each is a man at war not only with the city (and the crime that has become inherent to it) but also with himself: for Bruce, this means grappling with the privilege his family name affords him, as well as the fact that he is new to the life of the vigilante, and his training pales in comparison to the real-life application; for Jim, it manifests in his fellow police officers who try in vain to corrupt him, as well as the stress and strain of his home life.

It comes as no surprise, then, that the two finally decide to team up as Batman starts to take on bigger targets. Once it becomes clear to Jim that the Bat has a heart, and is more righteous than the police who allegedly are working to uphold the law, the writing is on the wall for a partnership that will define the careers of these two men. Again, Miller shines at painting the early days of our heroes, and making us believe in the evolution from “all the right people hate him” to “I’ve got a friend coming who might be able to help” as the unlikely alliance between cop and Bat comes to be.

Batman: Year One is a great read for anyone looking to get started on reading Batman, or for those who want a good reminder of where it all began. It’s obvious that Miller rubbed off on Nolan, as the Gotham of Year One seems ready to jump off the page and become what we see in parts of the Dark Knight trilogy, particularly Batman Begins. There are some great nods ahead for folks who are even the slightest bit in the know, particularly in the scenes with Harvey Dent and in the story’s ending, and for us Bat-fans whose cowl ears are a little longer, a chilling foreboding when the events of No Man’s Land and The Black Mirror are concerned…

Although I’m personally not the biggest Frank Miller fan, there’s no denying that Batman: Year One is a classic, and definitely deserves the seat of honor it has attained among Batman tales. If you haven’t read it, get on that, and if you have read it, read it again. 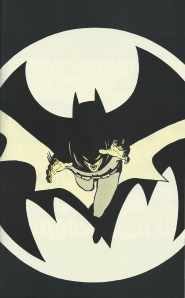 3 thoughts on “Batman: Year One”