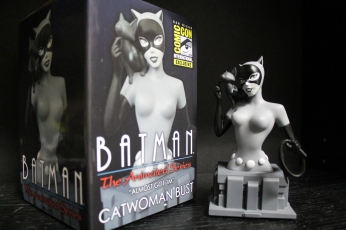 Meeee-ow! When so many of us were growing up, Bruce Timm and Paul Dini’s Batman: The Animated Series provided nothing short of the definitive Batman experience, giving us distinct and iconic visions of just the right way classic Batman characters ought to be portrayed. One key example of this is Adrienne Barbeau’s turn as Catwoman, supplemented by Timm’s design of the character, provided a new “classic” Catwoman– and now Diamond Select Toys has brought her to life! In keeping with the noir tone of Batman: The Animated Series, the first run of DST’s animated Catwoman bust has been created in black and white, capturing the darker, shadowy aesthetic that the show aimed for. It’s an interesting choice, and one that certainly has paid off in bringing fresh life to this timeless design.

The bust, available exclusively at San Diego Comic-Con this past July (though some extras could be purchased last weekend at New York Comic-Con), is part of a limited set of 1100 pieces (each individually numbered on the bottom of the base, the box, the seal, and of course, the certificate of authenticity). Each bust stands at roughly 6 inches tall, and features an art-deco base that pairs nicely with the black and white color scheme to echo the show’s animation style. The level of detail on this bust is incredible, and can be seen particularly in Catwoman’s whip, mask, and the cat that sits delicately on her shoulder– Varner Studios and DST continue to bring top-notch work and create a high-quality bust!

This animated Catwoman black and white bust is a great addition to any Bat-fan’s collection, and looks charming beside her con-exclusive counterparts Batman and Harley Quinn! (Never fear, though, collectors– if you couldn’t make it to SDCC or NYCC and can’t find these, it won’t be long before the full color versions are available at your local comic shop!) 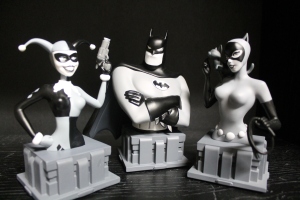 For more about New York Comic-Con, be sure to check out our NYCC preview post, and get your news and reviews about all kinds of Bat-media right here From the Batcave! And keep an eye out for more Diamond Select Toys highlights– we’re featuring their Gotham Select “Roughed Up” Penguin figure, Batman: The Animated Series busts, Gotham MiniMates, and a special look at their upcoming products from Gotham, Batman Classic TV Series, and Batman: The Animated Series direct from their NYCC booth!