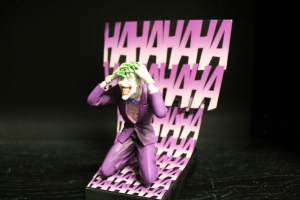 “If I have to have a past, then I prefer it to be multiple choice”– so the Joker himself says in Alan Moore’s seminal Joker work, The Killing Joke. While the Joker’s origin has often been a subject of debate (and deliberate ambiguity), most prefer the tale woven in Moore’s Killing Joke, which depicts the Joker as a down-on-his-luck comedian and small-time crook whose life takes an unfortunate turn when he meets Batman and falls into a pit of toxic chemicals. In that story, he emerges from his chemical bath a changed– and deranged– man, clutching his newly-green hair and bleached white skin as a sickly smile spreads across his face and his world erupts with laughter. 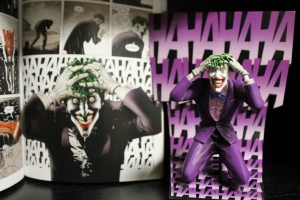 The “Birth of the Joker” Premium Motion Statue from Factory Entertainment perfectly captures this defining moment in the Joker’s history, faithfully recreating the terror and madness originally presented by Brian Bolland’s art in The Killing Joke. As you can see in the above photo, this statue is almost an exact replica of the original panel, and it holds true in almost every detail, down to the way the Joker’s hair filters through his gloves. 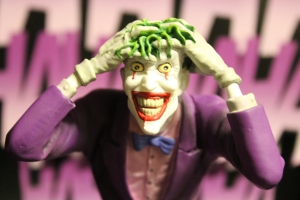 Crafted from heavyweight polystone with a thick rolled metal backdrop, the “Birth of the Joker” Premium Motion Statue is a collector quality product, and an awesome addition to any Joker fan’s shelf. Each statue is individually numbered, and comes with a certificate of authenticity. Of course, the best part of this statue is seeing it in motion– the Joker’s kneeling form is attached to the base with a heavy spring, which makes him rock psychotically back and forth as he reels with madness at the slightest provocation. Check out the video below (from Factory Entertainment themselves!) to see just what I mean:

If you like the “Birth of the Joker” Premium Motion Statue, you can order your own here— and get your news and reviews about all kinds of Bat-media right here From the Batcave!