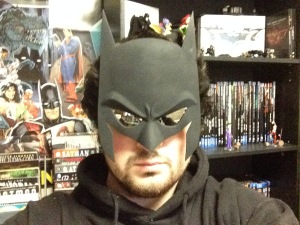 There’s only a few short weeks left until summer, Bat-fans, and though things typically remain dark and dreary in Gotham City no matter what time of year it is, most of us outside of the Caped Crusader’s hometown are going to have to start contending with some sunshine pretty soon. Thankfully, Sun-Staches has a solution for the sun-addled allies of the Dark Knight–Batman full mask Sun-Staches!

These shades will have you looking cooler than cool on even the hottest of summer days, as you protect your eyes with Sun-Staches’ 100% UV40 protection and water resistance up to 50m (and with that kind of water resistance, it’s no surprise that the glasses were a hit on TV’s Shark Tank!)

Of course, just as Batman has been through tons of Batsuits through the years (and more than his fair share of allies and enemies), there are tons of different Batman Sun-Staches— and even ones based on heroes and villains like the Joker, Robin, Harley Quinn, Catwoman, Poison Ivy, and more!

Check out the gallery below for a better look at the Batman Full Mask Sun-Staches, and keep an eye out for more Sun-Staches on all the coolest people at the beach, theme parks, and more this summer!