Fresh on the heels of the long-awaited Blu-Ray/DVD release of the Classic Batman TV Series from the 1960s (and the news that Adam West, Burt Ward, and Julie Newmar will reprise their classic roles in an upcoming animated film) comes a new way to experience and commemorate the 1966 Batman– thanks to plush toy company Bleacher Creatures!

Part of a set that includes Batman, Robin, Batgirl, Catwoman, and the Joker (with more to come!) these cute and cuddly collectibles recreate the iconic characters of the campy, fun Batman TV series in a way that appeals to collector and kid alike: no matter what kind of Bat-fan you are, you’ll be sure to love them! We got a look at the whole line of 10″ Batman ’66 Bleacher Creatures at New York Toy Fair (as well as some Bleacher Creatures that are yet to be released), and now we’re going to take a closer look at the Batman and Joker plush! 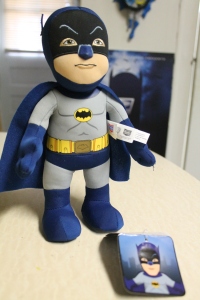 Every facet of the 60s Batsuit is rendered wonderfully, from the light blue stitching of Batman’s eyebrows to the pouches on his utility belt. Whether you’ve loved the show since you were a kid or are just discovering the game-changing series now, you’ll be amazed with how great this plush is!

They say that he who laughs last laughs best, and few are better at laughing than the Joker– particularly Cesar Romero’s remarkable take on the character! Now, you can laugh along with the Clown Prince of Crime in your own home with the Bleacher Creatures Batman ’66 Joker plush!

Modeled after the version of the Joker portrayed by the legendary Cesar Romero, this is the most detailed plush of the Joker I’ve yet seen. From his buttons and tie to the layering of his sleeves and jacket, this Joker is perfect.

The Batman and Joker Bleacher Creatures are incredibly well-made plush, and will stand up (literally– they stand on their own!) to any criminal or crime-fighter they come up against, whether it’s the daily wear and tear that comes with being loved by a kid or simply the test of time alongside other Batman Classic TV Series collectibles. If you want a quality Batman ’66 product for yourself or any Bat-fan in your life, Bleacher Creatures are the way to go!