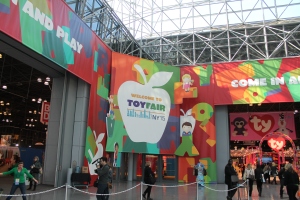 This past weekend, we had the pleasure of attending New York Toy Fair 2015 at the Javits Center in NYC, and (much to our excitement) there was a plethora of awesome Batman stuff to check out! While we’ll be doing specific booth showcases later on for companies like DC Collectibles, Funko, Mezco, Diamond Select, and more, here is a special look at the rest of the cool and exciting Batman products showcased at the fair. Read on to check out our gallery of pictures from the event as well as some quick information about our some of the highlights from the show!

Doll company Madame Alexander showed off an impressive new line of DC Comics-inspired collectibles, drawing inspiration from the classic roots of the 1960s Batman TV series as well as some more modern offerings like Harley Quinn and Poison Ivy.

Square Enix also had a lot to show, with new products featuring iconic characters from the upcoming video game Batman: Arkham Knight as well as figures that showcase Batman throughout time and space (with renditions of the hero as a samurai, cowboy, Spartan warrior, and more!)

Finally, Monogram showcased a bunch of great Batman-themed banks, keychains and more, with products showcasing not only Batman himself, but his vast collection of friends and foes. Check out the gallery below for some other cool Batman toys, plush, RC, and collectibles from New York Toy Fair 2015, including products from NECA! And stay tuned for more from New York Toy Fair 2015!