As you may know Lego Batman 3 wasn’t the only major Batman release this week– the Batman Classic Television Series also was released this Tuesday, collecting the entire 1960s Batman TV show for its first ever home video release. To coincide perfectly with the DVD and Blu-Ray Set, Diamond Select Toys has recently released a bust of Cesar Romero’s timeless take on the Joker! The Clown Prince of Crime has never looked so good!

The highly-detailed 6-inch resin bust features an intricately crafted look at the 1960s Joker, as portrayed by Cesar Romero, in all his costumed glory. A close look at the Joker’s hair (and yes, Cesar Romero’s infamous decision to not shave his moustache for the role is represented), suit, tie, and gloves reveal that no expense was spared to make this figure look almost exactly like its television counterpart.

Continuing in the tradition of the Batman and Robin busts is the Gotham skyline base, complete with a look at the Bat-signal filling the sky (a dangerous omen, no doubt, for this fearsome foe)!

The great attention to detail on this figure can be seen on the back of the Joker’s coat as well, with well-sculpted folds and buttons. 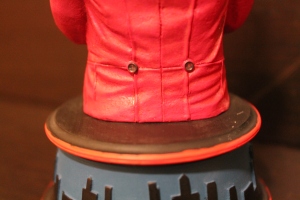 Also similar to the previous entries in the collection, the Joker bust is part of a numbered limited edition of 3000, with the specific number out of 3000 printed on each collectible’s base, box, and on an enclosed certificate of authenticity.

The Classic TV Series Joker Bust, available now for a retail price of $60, is a fantastic addition to any collector’s ranks. Also, keep an eye out for the next installments in this ongoing collection, including Riddler, Catwoman, Penguin, and Mr. Freeze! 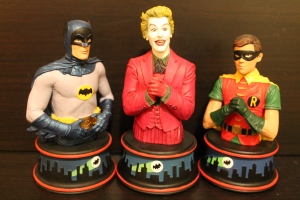