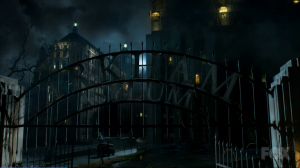 I swear I’m not going to make a habit of this. With most of the NYCC media frenzy clear (though not entirely over– check back later this week for a bit more!) I should be back on my normal Gotham review schedule starting tomorrow with my review of tonight’s S1E05: “Viper.” In the meantime, though, here’s another quick Gotham review!

As I said in my first impressions for this episode, “Arkham” leaves a lot of threads dangling, and I’m happy to see that Gotham is getting more comfortable teasing out its multi-episode arcs. We’re left particularly in the dark about Fish Mooney’s plans with her newly-acquired singer/”weapon” Liza, though I’d fathom we’ll probably learn more about that plotline tonight. Last week’s teaser also indicated that things are about to come to a head with Maroni and Penguin (and Jim, oh my!) so that should be interesting to watch unfold, given Cobblepot’s rather sly plan to rise through Maroni’s ranks thus far.

My biggest issue with “Arkham” is that it gave us more questions than answers, though some would say that for a show still trying to establish its viewership and storyline, that may just be a good thing. Personally, I’m just hoping that Gotham isn’t starting more things than they’ll be able to cohesively finish, but I have plenty of hope that the show has a comfortable future ahead of it. Ultimately, we’ll see how things play out as the season rolls on.

On a final note (as far as Easter eggs and such go) I’ve heard suggestion that the first singer Fish auditions could be Harley Quinn. Even if the glaring age gap between her and Bruce (in the wrong direction) weren’t there, she gets killed by Liza toward the end of the episode (unless I misinterpreted that fight), so case closed I guess– there’s no Harley here.

That’s all for this week– if there’s anything I missed (or that you disagree with) feel free to sound off in the comments or shoot me an e-mail at fromthebc@gmail.com!