What would a site like From the Batcave be if we didn’t talk about the cave itself from time to time? In this case, though, we’re not talking about Bruce’s Batcave– we’re talking about yours (and mine, for that matter!) Just how can we, as Bat-fans, create the ultimate Batcave in our homes? We’ve got some tips directly From the Batcave, so read on and find out! 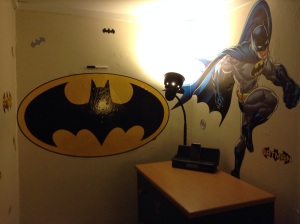 The first step to turning your place (or at least a room or two of it) into your very own Batcave of sorts is to get some cool Bat-stuff for your walls. Normally you can pick up a free poster or two at your local comic book shop or convention (New York Comic-Con in particular is GREAT for free posters and the like– if you can make it there, I highly recommend it!) But if you want your walls covered in some really quality Bat-stuff, look no further than RoomMates. The giant wall stickers are peel and stick, so they can be put up and moved around with ease, and transform any room that has them into something MUCH cooler. In this case, they’re a key ingredient to the ultimate Batcave. (Especially the Batman wall decal and giant Bat-Symbol, which doubles as a dry-erase board for important reminders, countdowns, and the like!) 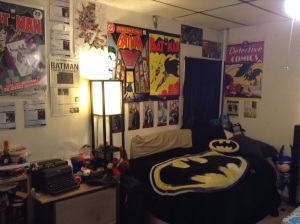 Aside from the awesome posters (why yes, those are character portrait mini-posters from Batman and Robin and no, I’m not ashamed of them… also, see point #1) the thing that really stands out here is the Bat-bed (I promise, I don’t actually call it that.) Still, popping one of these big cozy Batman blankets on your bed or couch and an accent pillow or two really changes the dynamic (duo) of a room. I’d also recommend some extra little accent items (like the DC UglyDoll Collection by GUND, seen just above the Bat-symbol pillow) to spice the place up and give it a classic, fun feel. 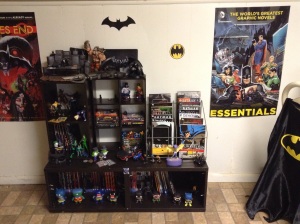 3) The Collectibles
“Where does he get those wonderful toys?” asked Jack Nicholson’s Joker in Batman (1989), and he may not have just been talking about Batman. After all, there are plenty of Bat-fans who have a burgeoning collection of Bat-memorabilia (like my Classic Batman TV Series busts, which you can see in the top right storage square), but it’s all about where you keep them! I found these bookshelves/storage spaces at Bed, Bath, and Beyond (strongly resisting the urge to make a Bed, Bat, and Beyond pun here) for pretty cheap, and even though I’m going to probably need a few more to hold my growing comics and memorabilia collection, they’re great for holding the things I have right now! (Also, note the callbacks to points 1 and 2 here– (1) free posters from comic conventions and smaller RoomMates stickers on the wall, and (2) a Batman cape from Six Flags draped over a nearby chair as both display and furniture accent.) 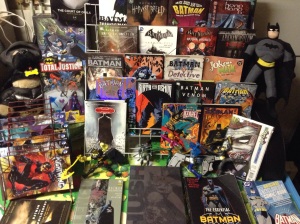 Finally, when all is said and done, the ultimate Batcave has got to be home to some comics. After all, the comic book (and graphic novel) is the true home to the Caped Crusader, so what better way to show your love for the character (and big ol’ comic book collection) than with a comic shop-style display rack? I actually got lucky and came by the display racks shown here and in point 3 when a teacher I know was getting rid of some old supplies, but I’m sure that if you search around on the internet or at your local furniture store or comic book shop, you could easily find something similar.

I hope you enjoyed our guide to creating the Ultimate Batcave, and that you’ve found it helpful for organizing your own collection/room theme or starting a new one. Ultimately, the true secret behind having a great “Batcave” in your home is proudly showing the comics, figures, and the rest of your collection; if it’s what you care about, there’s no reason not to let others know. (That said, there’s plenty of great ways to do that, as we’ve just shown you.) On a final note, even the best Batcave has room to grow– so perhaps as our own collection grows and changes, you might see a “How to Create the Ultimate Batcave pt. 2!”