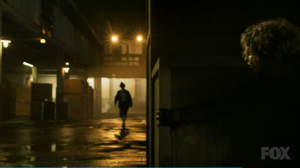 With the next episode of Gotham just a few hours away, let’s take a look back at S1E02: “Selina Kyle.”

1) Looking back at our First Impressions, there’s a thing or two I want to clear up, namely in the villains department. I mentioned the Dollmaker when talking first impressions, and I realize that he’s not exactly a household name (nor, really, are Prof. Pyg and Victor Zsasz, whom I touched briefly on when discussing the Gotham Season 1 Trailer.)

With that in mind, I want to let you know that sometime later in the week (hopefully before New York Comic-Con starts stealing all my time!) I’m going to put up a detailed look at the villains of Gotham— who we’ve seen in the season so far, who’s on the way, who’s been alluded to, and the like.

This week’s episode moved a bit slower than the pilot– I feel like the pacing on this show is still finding its way. I liked the comic-book-esque quick treatments all of our dangling plotlines got (Bruce & Alfred, Selina, Fish, Cobblepot, even Allen & Montoya) but for about the first half of the episode, it didn’t really feel like we were going anywhere. That said, as soon as Barbara calls up the Gotham Gazette, the episode heats up, takes off, and doesn’t let go.

“Did you give them this? You’ve done it before!”

Following Barbara’s call, we also get a quick insight to the fact that Bullock might not be as corrupt as he was initially portrayed when Essen accuses him of calling the paper, stating that he’s done this before. Is this the first glimmer of a more straightlaced Harvey Bullock, or is it just him whistleblowing on other people’s cases?

As always, I’ve got to give credit to some of the scene-stealers of this week’s Gotham, namely Carol Kane as Gertrude Kapelput, the Penguin’s mother, Robin Lord Taylor (shining again this week as Oswald Cobblepot), and of course, Camren Bicondova as this week’s title character, Selina Kyle. We hadn’t seen much of Bicondova in the pilot, but given her appropriate spotlight in this episode, she takes center stage and runs with it, giving us an excellent glimpse at both the cunning and the compassion that will later inform Kyle’s Catwoman persona.

The two Cobblepots (well, one Kapelput, but still…) are both excellent in their own right. Veteran comedic actor Carol Kane puts in a charming (and slightly creepy) scene as the mother of the Penguin, and her inclusion on the show at all makes me wonder if/how much they’ll be leaning on the Penguin: Pain and Prejudice storyline– hopefully quite a bit, as it’s one of the better villain backstories out there.

“Always he comes home to his mother.”

As always, Robin Lord Taylor thrills as Oswald Cobblepot, bringing more and more menace to the character every week– I’m definitely intrigued by his story so far, and curious to see how his newly-rented trailer and stolen truck (not to mention the hostage) pay off in the long run.

3) References/Easter Eggs You May Have Missed

Gonna be a little less full than last week, to be honest– I didn’t see too much worth bringing up in episode 2. Nonetheless, here’s my take on the latest Easter-eggy references in Gotham:

The most obvious nod aside from Dollmaker (whom I’m not even bringing up again because I’ve already talked about him too much) is to Salvatore “Sal” Maroni, Falcone’s chief rival and the head of the only Gotham crime family able to stand up to Falcone’s empire. Word has it we’ll be seeing Sal in tonight’s episode, so it looks like this foreshadowing is going to come to fruition early.

Next up is the fact that the waiter (and Fish’s “exercise boy”) is named Lazlo. Given what we know from the full season trailer, Professor Pyg is due to appear in Gotham sometime soon, and his secret identity (in the comics at least) is Lazlo Valentin. It’s not exactly a common name, so we’re chalking this one up to a bit more than a coincidence. Still, whether or not the Pyg and the waiter are the same person remains to be seen.

I couldn’t find much about Selina Kyle’s mother (I’ll admit I haven’t read up on my Catwoman), but given that she’s prominently featured in the episode and a character I don’t know much about, it’ll be interesting to see where Selina’s hunt for her missing mother leads.

Nothing more than a throwaway name reference like last week’s hint toward Solomon Grundy, but nonetheless a fun nod (if it was intentional.) Hush is a favorite villain of mine, and it’d definitely be interesting– and possible– for a young Tommy Elliot to show up in Gotham as a pal of Bruce.

In one of the last shots of the episode, we get a glimpse inside the trailer (and the mind) of Oswald Cobblepot. Particularly, we get a look at how he sees the city of Gotham– mayor Aubrey James is wearing a dunce cap and touted as a pig (another reference to Prof. Pyg?), territory is divided, and (perhaps most interesting) there are references to Barbara Kean as a “lying slut.” What dealings has Cobblepot had with Barbara, and what would lead him to label her as such? Could this be tied to the dirt that Montoya has on her?

That’s all for this week– if there’s anything I missed (or that you disagree with) feel free to sound off in the comments or shoot me an e-mail at fromthebc@gmail.com!