Welcome to “What the Bat Dragged In”!

It’s been a particularly Gotham-y week, with set photos and official releases from the show galore; plus, Batman heels, Penguin concept art, a glimpse at Nightwing, and more in this week’s What the Bat Dragged In:

Leading this week’s roundup are some recently-revealed concept images of The Penguin for the 1992 film Batman Returns. Comic Book Movie.

While we’re on the subject of The Penguin, check out these images of his alter ego, Oswald Cobblepot, on the set of Gotham. Daily Mail UK.

We also got this peek at Bullock and Gordon from Daily Mail UK.

We not only got the first official image of Selina Kyle from Screen Crush, but also this look at Bruce and his parents on that fateful night in Crime Alley. Screen Crush. 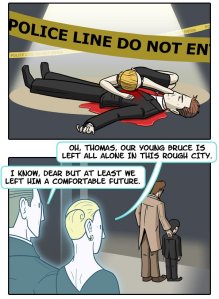 On a similar (enough) note, check out Dorkly‘s take on Thomas and Martha Wayne seeing how their son turned out. Dorkly.

Take a look at the first still of Nightwing in the upcoming DCAU film Son of Batman! Comic Book Movie.

The cast of Marvel’s Captain America: The Winter Soldier (trash) talks about the upcoming showdown between Cap 3 and Batman vs. Superman. Youtube.

Finally, “Shoes of Prey,” which offers custom-designed shoes you can create, put together some superhero-inspired footwear, including tributes to Batman, Robin, and more. Comics Alliance.

That’s it for this week, but check back next Friday evening and all through the week for more news From the Batcave, and be sure to like us on Facebook and follow us on Twitter for the latest updates!