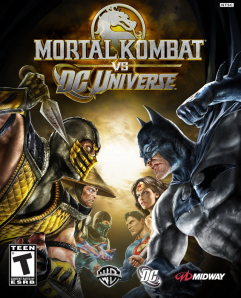 Mortal Kombat vs. DC Universe is an arcade-style fighting game that mashes DC’s finest heroes and villains together with the most iconic figures from the classic Mortal Kombat series. It was released in 2008 for PS3 and Xbox 360, and features a story that showcases (out of continuity with either the Mortal Kombat games or the DC Universe) the conflict that arises when Shao Kahn and Darkseid are accidentally fused into “Dark Kahn,” bringing the DCU and MKU together.

The game features 20 playable characters at the outset, with two more available through in-game unlocks by beating the DCU story mode and the Mortal Kombat story mode. The fighting style is revamped from previous Mortal Kombat games, with each button corresponding to a specific limb. This layout was revisited for the 2011 game Mortal Kombat, though Injustice: Gods Among Us returns to the earlier control scheme of buttons corresponding to light, medium, and heavy attacks.

Mortal Kombat vs. DC Universe also features a new method of attack called “Free-Fall Kombat,” wherein two characters have the opportunity to fight their way off a stage and battle in mid-air to see who will land on top and deal major damage to his/her opponent. It’s a pretty nice addition to the usual Mortal Kombat pattern, and seems to be a precursor to Injustice‘s stage transitions.

If you’re a fan of DC, fighting games, or both, this game’s worth at least a look (although if you’re more on DC’s side than the Mortal Kombat’s, you might be better off checking out Injustice, as it features only DC characters and is a bit easier to get the hang of.) Mortal Kombat vs. DC Universe nonetheless is a favorite that has withstood the test of time, as six years after its release it remains a great game to pick up and play alone or against a friend.

Check out the rest of our “Video Games Week From the Batcave“ coverage, and check back later tonight for the last installment in Video Games Week, Gotham City Impostors!

Keep an eye right here for news and reviews about all kinds of Bat-media, and be sure to like From the Batcave on Facebook and follow us on Twitter to get the scoop first!