Recently I had the pleasure of attending New York Toy Fair 2014, where among the many great Batman products on display was– Holy Toy Fair, Batman!– Mezco’s line of 1960’s Batman products, like their Mini Mez-itz based on the series and their Classic TV Series Batmobile. 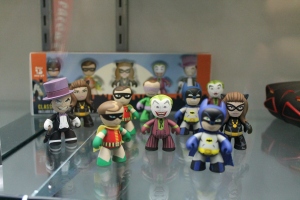 While I can’t speak for the new Mini Mez-itz other than to say that they look great and I’m excited for when they come out this fall, I do personally own a Classic TV Series Batmobile, and I’m quite pleased with it!

The Batmobile, based on the classic red and black design from the TV show, comes complete with poseable Mez-itz of the Batman and Robin Minis from the series (the same size as all the other Mez-itz Minis, so they can interact!), and is an excellent replica of the iconic vehicle.

Another great feature of the Classic Batmobile is that it’s a great way to re-live or share memories of the classic 1966 series, depending on whether you prefer to play or display. Now Adam West’s Batman can “Biff!” and “Pow!” and “Wham!” right alongside the likes of Christian Bale’s Dark Knight and many others… especially with the aid of other Mezco Mini Mez-itz like the ones from their Dark Knight Rises collection and those from their DC Blind Box series.

Mezco’s Classic Batmobile with Batman and Robin is a great toy to play with or collect, and is available at  Mezco’s website. 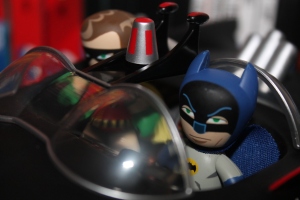