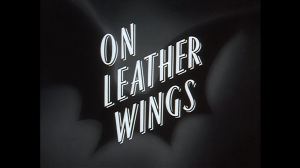 “On Leather Wings” is the first episode of the acclaimed Batman: the Animated Series. As such, it faced the burden of establishing the world of the show, while simultaneously delivering an engaging Batman story and sticking to a roughly 20-minute timeframe; thankfully, it does not disappoint.

The story, which focuses on confusion between Batman and the beastly transformed Dr. Kirk Langstrom (a.k.a. Man-Bat), expertly sets the tone for the entire series, clearly broadcasting from its first moments that while BtAS is a show aimed toward children, it is not one to avoid plotlines that some might consider potentially “too scary” for kids.

Contrarily, Batman: the Animated Series relishes in its darkness, and doesn’t dumb down the Caped Crusader for its viewers, instead presenting a well-crafted and maturely presented story in spite of its billing as “children’s programming.” Sure, it’s not Christopher Nolan gritty, but (like the theme it borrows) the show is Tim Burton dark in the best of ways.

“On Leather Wings” is the perfect start to an amazing series, giving thrills and chills to old fans of the Bat and newcomers alike.

One thought on “Batman the Animated Series: “On Leather Wings””